Isn’t it funny the way life works? Just over a month ago, it had been over a year since I’d last had a holiday. I was getting a bit antsy and tetchy, and everyone I work with can attest that I definitely needed a break. Fast forward five weeks and I’ve been on three holidays in three different countries! What a jet-setter am I? Holidays, who knew they were just like buses?

The third and final trip was to Dublin, a surprise for Steven’s birthday, and the first city break we’ve done since Amsterdam four years ago. I’m now thoroughly broken thanks to three days of trekking across the entire city, making the most of all that Dublin has to offer. And what a lot it has to offer! 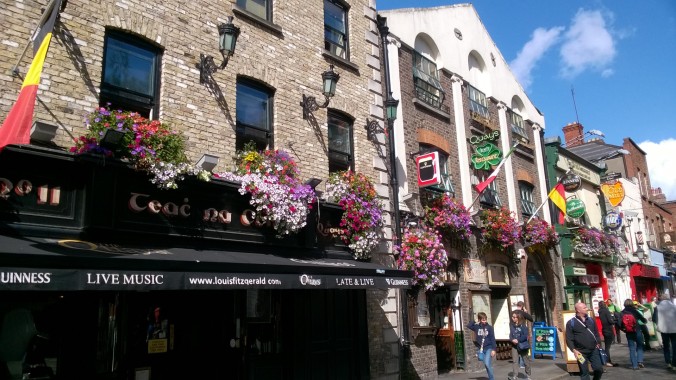 Dublin is a fantastic city. The people are friendly, the tourist attractions are varied and plenty and there is food and booze everywhere you turn – my kind of city! It reminded me of the best parts of London, New York and quaint villages, all blended together. We found out all about the political uprisings and troubles that Ireland went through, drank a lot of Guinness and as if that wasn’t enough, we discovered that there’s a huge literary heritage in Dublin.

Jonathon Swift, WB Yeats, James Joyce, Oscar Wilde and Samuel Beckett (to name a handful) all have roots in, or associations with, Dublin. Many attended the beautiful Trinity College, others grew up in the urban hub, but all were inspired by the city and Ireland’s rich and tempestuous past.

Strolling through this vibrant and stunning metropolis, with tales of revolutions and civil wars ringing in our ears, it wasn’t hard to imagine what had inspired these literary greats. The beauty of the city itself, the impressive and courageous feats that had come to pass among those streets, the buzz and hubbub that form the pulsing heart of the city are inspiration personified. I could feel my creative juices a-bubbling and I was only there for a matter of days – imagine if you lived there?!

Dublin’s not just the home of talented writers, it’s also host to multiple libraries. I know, that sentence sent my heart a-flutter too. We visited two but only had the chance to go into one in our brief sojourn. I’m certain I could waste an entire weekend just going round Dublin’s libraries. Did I say waste? I meant invest. We admired the outside of Trinity College’s Library and pored over the contents of the Chester Beatty Library – which were particularly fascinating. There were books and manuscripts from all over the world and throughout the centuries and I spent a very happy couple of hours drooling over them.

In short, if you are a word/book nerd like I am, you should definitely go to Dublin. You can indulge in your literary obsessions and top it all off with a good pint and Irish cheer. What more could a bibliophile ask for?